Eric
Alcalá de Henares, Madrid, Spain
I recently earned my Masters in History at NWMSU and am now working as a language assistant in a Spanish elementary school.

Two weeks ago my parents arrived for a weeklong visit. Their flight came in on a Wednesday and I met them at the airport and helped them get their luggage to Alcalá. We checked into their hotel in La Garena, then went for some tapas at El Tapón which was nearby. After this we took a walking tour of Alcalá. We got to see the main sights in the town including the old city wall, the Cathedral (which we went inside of), Calle Mayor, Palacio Arzobispal (where Christopher Columbus met with Queen Isabel on the subject of financing his voyage to the Americas), Plaza Cervantes, and Alcalá Universidad. Afterward we ate at an American restaurant near their hotel, Pinky Burger. They were quite tired from their long voyage over the Atlantic so they went to bed after this. It was great to see them and I was very excited about planning an itenerary for the rest of the week.

The next day I met them for lunch at Indalo in Plaza Garena. I took them over to the big department store in La Garena, El Corte Inglés (The English Cut). We looked at some of the strange European appliances there such as irons with a hose connected to a steam pump. Later that evening we went to Madrid. We took the metro from Atocha to Puerta del Sol where we saw many street performers such as the decapitated-head-on-the-table-man who scared passersby with sudden shouts and the street-sweeping-living-statue. Dad enjoyed watching these people get scared and took some video of it. After a look around this lively center of Madrid we headed down the street to Plaza Mayor where Mom and Dad took some pictures of the 17th century buildings. We went to Mercado San Miguel after leaving the plaza and saw some amazing things: local foods, giant chocolate egg sculptures, and a man making intricate designs in espresso foam with a stylus dipped in chocolate syrup. This was one of Mom's favorite places we visited. We ate at the Museo de Jamón on Plaza Mayor. We sat in the basement and ate next to a group of Italians. Mom ordered a roast chicken, Dad had a fried whitefish, and I had a plate of Iberian ham and cheese.
I had the whole of the next day off work. I met Mom and Dad at their hotel and we went to Casa de Hippolytus, the ruins of what was once the academy of the ancient Roman town of Complutum, which sat on the site of present-day Alcalá de Henares. The ruins were discovered not long ago and were better preserved than some of the excavated Roman houses in Rome itself. We and at Casa Rojas then went to the village of Chinchón via bus from Madrid. It was nice to visit the town again and to show Mom and Dad around. We went into a food store I had visited the last time. The same old man who had talked me into buying a bottle of anís last time took us around his shop and showed us all the local products. We bought some olives and almonds thanks to his salesmanship. After this we walked around Chinchón's Plaza Mayor/bull ring. We went into a bakery and bought some pastries from a woman who seemed rude at first, but warmed up to us soon. She asked us where we were from, then told us she had some apple, strawberry, and kiwi pastries ready to come out of the oven if we wanted to wait. She had several intricately designed breads on display, molded and twisted into flowers, wreathes, and the crest of the local soccer team, Real Madrid. She asked us to follow her around the back of the store where she took us to see the ovens and the fresh pastries she mentioned. We bought one of the strawberry ones. We walked through the town some more, stopping in another food shop. Out front an old man cut up cardboard boxes and put them in a bin. While inside the store I noticed him walk inside, grab a beer from the cooler, and return outside to continue his work. Dad bought some sunflower seeds here (a popular item in Spain). We walked from here to the castle atop the hill, then wandered around the outskirts of town before catching the next bus into Madrid. In Madrid we went to Gran Vía and walked up and down the crowded streets, looking at the art deco and art nouveau architecture. We also stopped by an outdoor market which displayed items from different regions of Spain. We tried some Manchego cheese (Spain's primary cheese export, made from goat's milk) and some cider (sidra) from Asturias (a province in the north). We then went to Paseo del Prado and ate at a bar. The bartenders here wore black waistcoats and bowties and were more concerned with whistling to dogs and watching the Barcelona vs. Valencia game than serving the customers, but they were funny stereotypes of Spanish waiters (two old men with wry looks and a younger man who seemed to be in training). They seemed to come straight from a Hemingway short story.
The next day we went to Segovia. We had to buy our tickets and catch the train at Chamartín on the northern side of Madrid. The train moved fast and got us to Segovia in thirty minutes. Along the way we viewed the mountains of the Guadarramas and the darkness of two tunnels as we passed beneath some mountains. From the train station we had to catch a bus into the town. We ate a chain restaurant called Pan & Company. We finished our food and coffee then headed out, seeing this 11th century church: 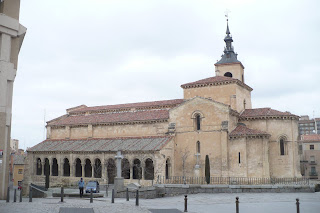 It was quite a bit colder in Segovia so we bought some gloves and hats at a store in town. As we walked down the street, we emerged upon this amazing sight: 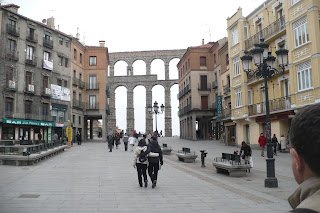 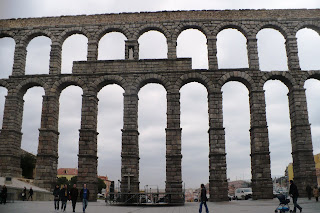 This is the Roman Aqueduct of Segovia, constructed sometime between the year 50-110. This is one of the largest and best-preserved aqueducts outside Italy. It is over ten miles in length. An aqueduct was a marvel of Roman engineering which served as a plumbing system. It carries fresh water from a source (in this case the Guadarrama Mountains) to a settlement by means of a pipe located through the top of the gradually-declining sloped structure. The aqueduct was built without mortar. The Romans invaded in the first century AD and took Segovia from the Celtiberians, the ancient people who likely gave the town its name. Monuments such as this and the road systems in Spain are the legacy of the Romans, along with the Spanish language, which is derived from Latin. We climbed a set of stairs near the aqueduct and took some more photos: 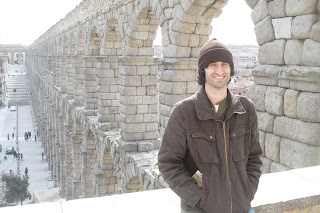 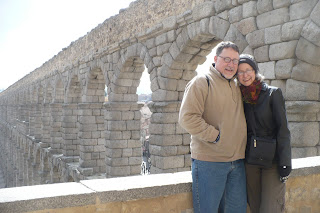 We walked further into town from here, past a former mansion called La Casa de los Picos which is now an exhibition hall which features traveling displays: 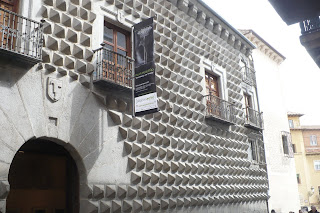 We walked further down a street then emerged upon a Plaza dedicated to Juan Bravo, a rebel from the 1500s. Bravo was from Segovia and led a group against King Carlos I (Holy Roman Emperor Charles V) in the Castilian War of the Communities. The Comuneros, as they were known, fought against the king whom they saw as a foreign invader who imposed high taxes, and against the feudal system of lords and vassals. Bravo and his followers were defeated and executed in 1521. Here is the plaza dedicated to him: 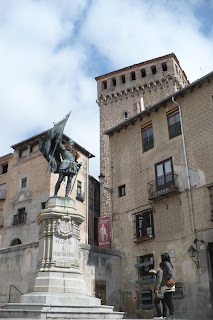 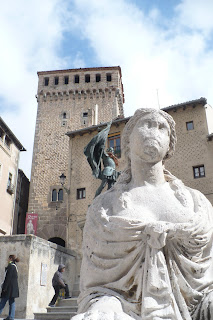 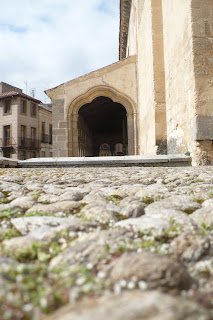 We walked down some winding streets of the old Jewish quarter, past a former synagogue which had been converted into a church soon after the expulsion of the Jews in 1492. (The Spanish Jews, known as the Sephardim, left for the Netherlands, North Africa, and Brazil. They are still a major Jewish community in some places ).
We soon came upon the Cathedral of Segovia, Catedral de Nuestra Señora. From the street, the several spires rising from the back of the building look like a stone pine forest: 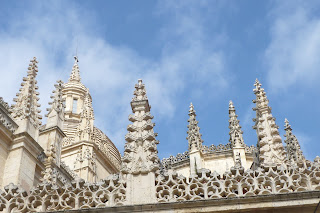 The cathedral was built in the late 1520s. It's front was impressive as well: 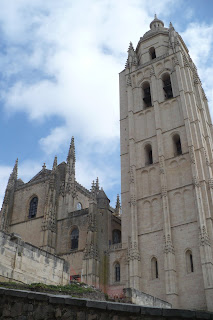 We then went inside this Gothic cathedral, constructed after the Castilian War of the Communities. We admired the stained-glass windows, the highly decorative and colorful altars, and high, columned vaults: 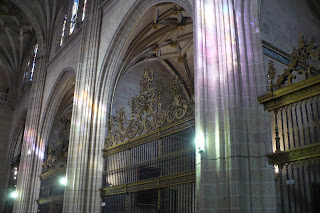 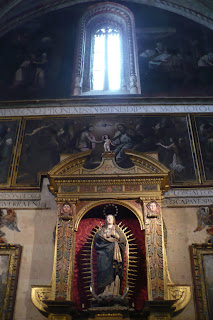 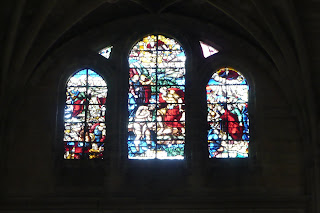 We then went to the Plaza Mayor and had coffee at a little café. From here, there was a good view of the Cathedral: 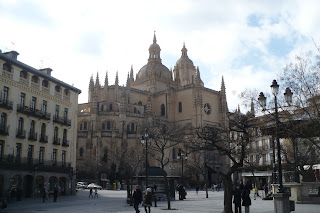 We walked past the Cathedral until we came to the Alcázar of Segovia, a large, fairy-tale style castle originally constructed in the 12th century and later renovated in the 1800s. The castle was originally a fortress. (alcázar is one of many Spanish words adopted from Arabic. It means "fortress," and also serves as the root of the name of Alcalá de Henares). It was later a royal residence and a military academy. Here is a view of the outskirts of the town from the high cliff on which the Alcázar stands: 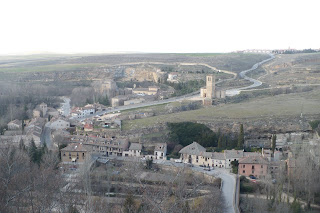 Here is the Alcázar itself: 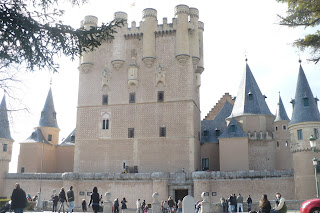 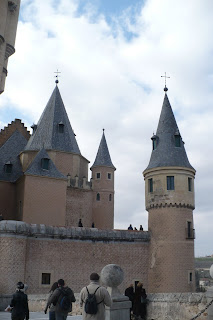 The inside of the castle was amazing. There were suits of armor: 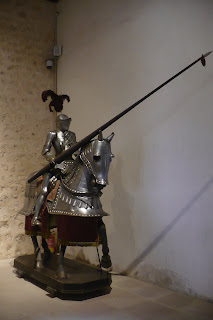 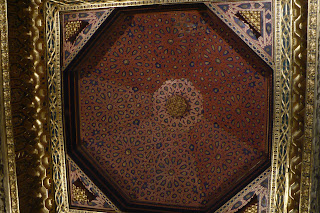 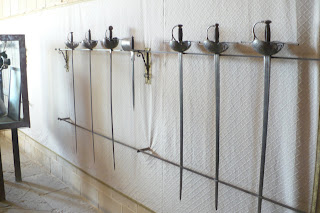 Here is a view of the towers fromt the courtyard: 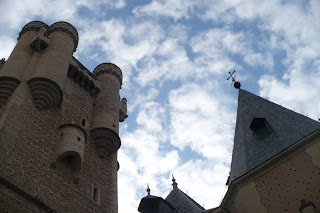 We then climbed a (at the time) seemingly unending spiral staircase to the highest tower of the Alcázar. The staircase was narrow and at times this was difficult with people coming up and going down. However, from the top there was a beautiful view of the city and the Cathedral: 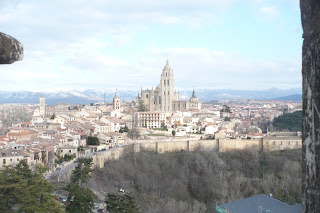 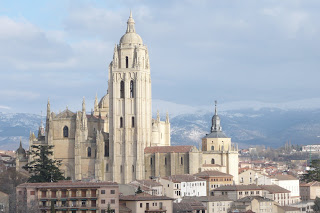 There was also a good view of the castle spires and countryside: 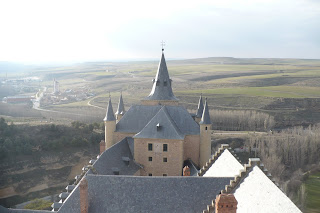 We left the castle and headed back through town to the bus stop, getting another look at the Cathedral and Aqueduct along the way. We arrived back in Madrid and looked around for a place to eat before deciding upon returning to La Garena and eating at Gino's, an Italian restaurant. We finished dinner late (as most Spanish people do) and went to bed to prepare for the next day.
Posted by Eric at 11:23 AM